We didn’t exactly take a waterproof cast cover, but…

Well the story really started when we began to climb for the second time in the Anapurna region. After 3 days of trekking it happened.

I broke my leg. Luckily, a helicopter came, soaring into the air with all five members of our family inside, and at last came to rest in Kathmandu, on Vayoda Hospital’s helicopter landing place. When we left Vayodah (me and Mummy in ambulance, Daddy and my sisters in a taxi) my leg had been set into a big full length cast.

Scarlett being a big, brave girl in the helicopter

The waterproof cast cover was delivered several weeks later in Chitwan National Park, where elephants are the great kings.

After one and a half weeks in Chitwan the cast cover because useful. My sisters were off to wash the elephants, my Nepali friend had to go to a funeral and so me and Mummy had to stay at our hotel, Travellers Jungle Camp. We went to the bathroom ad for the first time put on my waterproof cast cover. Woops, splash, the showers got out of hand! Water – war!

Me and Mummy had a waterfight until my sisters came home and we all played cards. It began when I threw a bucket of water at Mummy, big mistake! She threw one back at me. The bathroom got soaked as water went flying back and forth, having quite an adventure. Splashing back at Mummy all I could see was thousands and thousands of tiny droplets of water soaring to and fro around me. A lot of fun was involved in the weird and wonderful water fight. At last, after 2 and a half hours, both dripping, we left the flooded bathroom to drain, just as my sisters and Daddy came home.

On the first day in Thailand we swam in the Hotel Malaysia’s big, deep swimming pool. Me and my sisters played mermaids and used the rubber rings as boats, sailing around and often falling off…

The swimming pool was 3-4 metres deep and very fun. The cold refreshing water had a well tiled floor, which was painted a light shade of turquoise, as were all four walls. My cast cover floated, allowing me to plow easily through the water.

Scarlett in action with the waterproof cast cover

This was swimming from Mummy to Daddy in the wild raging waves of Ko Samui. The water was deep and green but yet my waterpoof cast cover floated above the surface, bobbing gently with the waves. We had a very good time in Ko Samui. I could not get in the sea without help. I could not do this because I only had 3 legs (when I was on all fours).

When we went to do a bubble makers course [an introductory scuba diving course] it was a disaster!

The air tanks were too heavy and the wet suits were too big. I only had one flipper, but the cast cover didn’t sink. It floated along like a good little cast cover and we managed to swim the huge distance (Mummy pulling me half the way). My waterproof cast cover saved me that one big day. 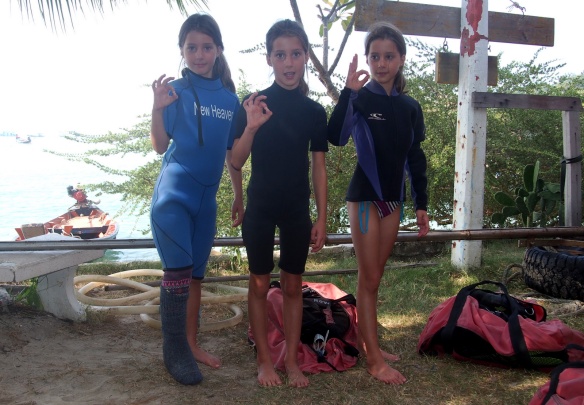 Nothing stops Scarlett joining in, not even a broken leg!

In Hua Hin, I had my cast taken off but my leg was so sensitive it couldn’t touch the water…

Hua Hin was an extremely nice place with an open, public swimming pool right next to our hotel. As my leg couldn’t touch the water I put on my waterproof cast cover. Then we all swam. We played for a very long time until I could take off the cast cover and slowly swim without it. YES! I didn’t have a broken leg!

The early days of freedom!

It’s taken a while, but finally we’re here. We’ve travelled for well over a week from Laos to get to this island off the Andaman Coast (although admittedly with a few stop, first to get Scarlett’s cast removed, then to idle in Prachuap Khiri Khan), but now we’re ready to start our two month, 300-mile, island-hopping tour down to Malaysia. The island is Koh Chang, the northern-most island on the West coast (not to be confused with the more famous Koh Chang on the Gulf of Thailand).

As I write, I am lying in the Mexican hammock my dad bought me before my first backpacking trip in 1999, a brilliant present that proved invaluable to loafing around Thailand then and is just as seductively comfortable now as it was all those years ago (provided that three 8-year olds aren’t also trying to fit into it – fortunately they’re all now asleep). The day’s two-hours-per-day of electricity are over and, as the waves lap around three sides of our bungalow that hovers over the bay on stilts, I can either look across the sea to uninhabited, jungley Burmese islands, with fewer lights than any country I‘ve ever known, or up, to see more stars than are ever visible at home. This finally feels like being in the Tropics. This is the first time I’ve strung it in all the places we’ve visited this time. Finally I feel like I’m back to the Thailand I once knew.

I’d begun to think that this Thailand had vanished. In 1999, Janet and I backpacked for a year around Thailand. We never booked ahead. And we mostly paid £2-3 a night for flimsy bamboo bungalows, and maybe 30-40p for meals.

Even then the bamboo beach hits were fast disappearing in Koh Samui but it seems now that they are relics of a bygone age. And we find ourselves rarely spending less that £20 for a room nowadays (and nearer £2 each for food). Sure, we need spacier accommodation with 5 of us to squeeze in, but Thailand has moved on in 15 years. There are a lot more tourists, Thais are wealthier and the bungalow operations realise they can get a lot more for their beachfronts.

Still, the places we’ve visited have perhaps not been representative. Koh Samui, Koh Tao, Pattaya, Hua Hin: we’ve somehow made our first month and more a tour of the most developed resorts in the whole country. And, Koh Tao apart, these aren’t the kind of places we dreamt of revisiting.

I hope the next two months can live up to its promise.

Although we’ve only done a little island hopping before going back to the mainland, I have experienced a lot. In going from one island, Koh Samui, to another island, Koh Tao, my opinion has changed to think that island hopping is great (apart from the bumpy ferries).

I like it because of the quiet little bungalows next to the beach so we can go in the sea every day. These bungalows are nearly always on the edge of a small group of shops and ATMs so we can get new money out easily and spend it in the shops.

This is so different to Nepal because Nepal, with its stinky smell and gardenless hotels is not inviting (the mountains are an exception), whereas here I feel free. Nepal’s towering mountains are not as beautiful as the sea and you can’t go swimming in them!

We spent New Year’s Eve in Koh Tao. Unluckily, I fell asleep for the fireworks.

Thailand has a lovely sea and a warm beach. The sea is not as cold as England. The weather can be cold but most of the time it is warm. Bangkok is a bit busy but the islands are nowhere near as busy. The thing I like best is the sea.

Thailand is very hot. It is good that it is hot because it warms you when you have been in the cool sea. Thailand is also fun and exciting since we’ve never been here before. The people are also very friendly especially to children.  My favourite thing is the people acting very friendly towards us.

Here on Koh Samui it is exceedingly hot and every morning you feel like you want to jump in the sea but normally you are out on other business and we only get to go in the sea in the afternoon. The sea is not exactly cold – not as cold as in England – but if you are a child then if you get cold you can go and lie down on the sand in the sun because it is warm. The sun seems to go down very quickly and I don’t know if I’m imagining it because I like it here so much. My favourite thing is how every day you can splash into the refreshing sea.

The food is every bit as good as I remember. The smell of the warm air feels like coming home, almost. The language feels so much more familiar than Napali; I understand snatches of it and it makes me feel excited and I want to learn more of it. My favourite thing is the night market food stalls.

Thai people smile and laugh so much. It feels so safe and friendly travelling here. Just how I remember – but even better with kids. And the food: wow! I’d remembered that it was good but since arriving I’ve also remembered how I grew my first ever belly here. Curse you fried honey bananas! After three months in the mountains, seeing the sea was such a relief. Is there anything better than throwing yourself into the cool sea on a blazing hot day? My favourite thing is… eating.

Is it really three weeks? Tomorrow we get on a bus to travel 7 hours over potholed roads edged with precipitous drops and soaring cliff faces to Kathmandu, then after 24 hours rest and a last chance to eat cheese before hitting SE Asia, we fly first to Delhi then Bangkok, where,  after another brief 24 hour rest, we jump on a sleeper train,then a ferry, then a songtiaw to Maenam on the island of Ko Samui. That’s five days of travelling.

But I am really looking forward to it. We’ve been very sedentary here in Sauraha but Scarlett had a checkup with her orthopaedic surgeon this week and he’s happy for her to start moving around more now. So we’re hitting the beach!