Roadside sunset on the bus from Cebu to Dumaguete 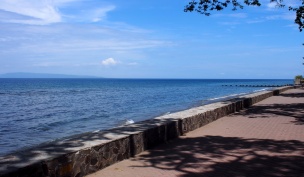 The promenade on Dumaguete seafront

Basketball seems to be a national obsession (along with cockfighting)

Perhaps it was coming directly from Singapore but it’s taken a little while to work out what’s different about the Philippines. And what’s familiar.

The people look very much like those in Malaysia but noticeably poorer. Designer fashions and branded trainers have made way here for threadbare t-shirts and flip-flops. And, of course, there’s not a Muslim headscarf in sight. Mostly Christian — a legacy of 16th century Spanish explorers — women here dress in the same kind of warm weather clothes you see in Hindu and Buddhist countries. Janet can finally put aside her long trousers and get back into shorts.

Like Nepal, there’s a home-made look to many of the houses, even concrete ones. And it’s not unusual to see an abandoned, half-built house alongside a beautifully tiled and painted one on one side and a giddily-angled wooden-stilted one the other. But the roads are in much better condition than Nepal. Not completely without bumpy, unsealed stretches but without the spine-jarring potholes that make Nepalese bus travel so arduous.

The food is a strange mix of familiar and unfamiliar, not helped by my finding Tagalog words rather difficult to fix in my memory (Sinigang, longganisa, kaldereta…). But the names aside, one thing is very clear: I wouldn’t want to be a vegetarian here. Everything has meat in it. In fact, meat seems to be something of a national obsession. There are roasted chicken shops on every corner in the city, as well as burger stands and restaurants fronted by a dizzying array of meaty stews and soups. As for flavours, after Thailand and all the Indian food we ate in Malaysia, it seems a little bland, relying on savoury flavours rather than spices, salt, sugar, lime juice or chillies. Still, now my palate has lowered its expectations, it’s really rather delicious… More like European or South American cooking than much of what we’ve had while abroad.

And it’s cheap. Not just compared to Singapore. Compared to anywhere else we’ve been. Dining in one of the nicest restaurants in Dumaguete, each dish only cost around £2. Pastries from a bakery cost 3p each. A 2km taxi ride cost 15p each. I feel surprisingly wealthy.

But our new-found wealth comes at a price. There’s poverty here. Lots of it. I’ve not seen a single overweight person – something I’ve come to realise represents GDP fairly accurately over the countries we’ve moved through. And we’ve seen kids begging for the first time since Nepal. But despite the hardship, everyone is incredibly friendly. You can smile at and make jokes with strangers. People are helpful. And everyone speaks great English with a charming, half-American accent and American-style tendency to call strangers “sir” or “ma’am”.

Finally, the landscape here is both beautiful and unlike anywhere else we’ve been. Made up of so many islands, we’ve never been far from the coastline and ferries or bangkas (outrigger-style wooden motor boats) are required for a lot of journeys. But the interior is lush and rises dramatically away from the seafront, with plant-life that ranges from familiar banana plants and coconut palms to more deciduous-looking trees I’ve yet to identify. And, for the first time since we left home, there’s a breeze.

It’s refreshing to be somewhere unfamiliar. Having to take in even the little details seems to slow time down, and I’m enjoying having to think on my feet rather than rest on experience when making my way around. My first impressions have been very pleasant so far.

3 thoughts on “The Philippines: First Impressions”