We hate them because they bite you and it really itches. They can bite you anywhere but they can’t bite through clothes. They come out about six o’clock. We’ve bought a mosquito repellant called Deet which keeps them away quite well, although sometimes we still get bitten.

The most mosquitoey place we’ve been in travelling is Chitwan where there were loads of giant mosquitos which didn’t even go to sleep in the day.

As well as buying Deet, we bought a mosquito racquet. It looks like a tennis racquet with a big lightning flash in the midde and when you turn it on a hit a mosquito with it, it electrifies them and they die. We have used it on bees and wasps as well.

Jemima with a captured lizard

There are lizards that you will see in Thailand, Laos and Nepal called geckos. They eat mosquitos and are friendly. They wait near the lights because mosquitos are attracted to those places.

Mosquitos used to bite Mummy the most but now they hate (or love eating) Tettie as well. She had more than 20 mosquito bites on her legs – they were covered! She couldn’t stop scratching them but she shouldn’t do that because it makes them bigger. Luckily, they hardly bite me at all.

WE ALL HATE MOSQUITOS!

I’ve just been served beer by a toddler who spoke perfect English.

When we arrived at the Musée des Dinosaures in Savannakhet, I wasn’t expecting much. It warned our guide book that there were just a couple of rooms and the whole place was obviously underfunded but that it had displays from several local digs where they’d found bones from t-rexes, spinosauruses, several sauropods and even a newly-identified species found only here in Laos.

Personally, I’m fond of small museums. They often have a bit of character and can generally be relied upon to throw up some surprises as the curators struggle to fill them up. Plus you don’t risk the kind of foot-punishing, brain-numbing museum fatigue delivered by bigger places. And sure enough, the exhibits were limited to several bones from a sauropod, together with a fairy-lit outline on the wall to show how they fitted together and a dozen or so display cases of other finds, together with some unusual rocks and a meteor.I’m pretty sure it wasn’t a fragment of the meteor that wiped out the dinosaurs but, hey, who can argue with seeing a meteor.

Anyway, it was all interesting enough and with half an hour or so killed in discussing paleontology and meteors, we were ready to leave… when the curator stepped out of a doorway, somewhat like the shopkeeper from 70’s kids’ TV show Mr. Ben, and asked if we would like to see some more bones.

“OK,” we replied, so he opened a drawer.

“This bone from Tyrannosaurus Rex,” he said, lifting a cannon-ball sized lump out of the drawer. “You want to hold?”

And that was it. I had in my hands a real T-Rex bone. Not a plaster-cast replica. The real thing.

I couldn’t believe it. A 65-million plus year old relic of another aeon. In my hands. 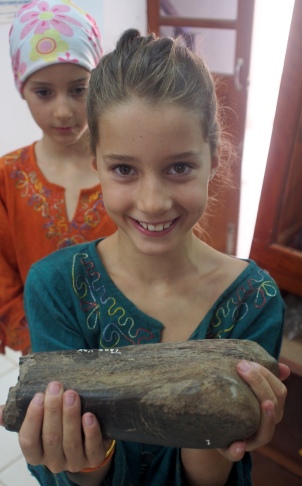 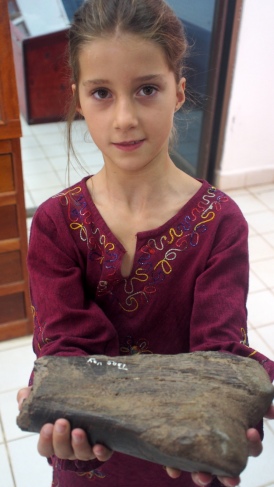 And then it got better. He took us into the back where they clean their finds and showed us more bones, letting us hold them each time. He showed us the plaster casts they were making for a Thai museum, the tools they use and the display they were putting together for their newly-identified species.

But through it all, and long after we left, it was the T-Rex bone that I kept thinking back to. The museum here may be tiny, but you don’t get experiences like this at the Natural History Museum.

We’ve been in the sleepy town of Savannakhet for 3 nights now, and I love it here!

To the untrained eye, it may seem as though there’s not much to do here.  It’s hard to believe it’s Laos’s second largest city; it’s quieter than Horsforth, the suburb of Leeds, UK, where we live.

But having come from some of the most hectic parts of Thailand, it’s a tonic.