Picture the scene. It’s Sunday morning, we’ve not slept properly since Thursday night. We’ve been travelling for 3 days, and are on the final leg of our journey, a 7-hour ferry. Only we’ve been on it for 2 hours and it’s not set off yet.

There are chickens flying around the boat, which have just been recaptured by their owners, and there’s a group of about 12 kids crowding around our children pointing, laughing, and generally gawping at the on board entertainment (the existence of triplets).

The endurance test began with a couple of flights, then a long taxi ride and some haggling over bus fares, so fierce that even Fergus got into a shouting match. After a very short nights sleep in a truly disgusting hole of a hotel, we set off on our 14-hour bus journey (I kid you not). The bus was packed, people on stools all down the aisle, chickens, luggage and men smoking everywhere. The smell from the strange Indonesian clove-scented cigarettes is sickening; I thought I was going to throw up most of the way. Thankfully, the girls all dropped off, but sadly it coincided with us all having to exit the bus to go on our first ferry.

Two hours later, after an on board captive-audience toy sales pitch set in a fog of cigarette smoke, we clamboured back onto the bus, when Scarlett’s seat broke. It did provide some entertainment as it swung back further than the full recline position, so she was effectively lying on the lap of the lady behind her. Futile attempts by the bus conductor to repair it with some string continued the entertainment; in the end we were in luck and someone got off the bus so she could swap seats.

The girls all managed to get back to sleep, only to be turfed off the bus again for the complimentary lunch. Now, I’m not a fussy eater, as anyone will tell you, and I’ll try anything once. But there was something about the luke-warm vat of fish-head curry, left lying in the sun for hours, that just didn’t appeal somehow. We bought ice lollies. The only other food we’ve had en route is a pot noodle, some deep fried seaweed and a few biscuits, plus a few chewy mint sweets a nice Indonesian lady gave our children. There have been a few eaterys along the way, but you know when you senses scream food poisoning? Spontaneous 3 day fast.

It was the last 6 hours or so that were the worst. I was just daydreaming and looking out of the window, lost in Adele’s greatest hits on my ipod shuffle, when the terrible thing happened. My ears physically recoiled as the on-board sound system spluttered into life, booming Indonesian pop hits at full volume, making even listening to music through headphones impossible. This woke up everyone on the bus (most of whom had been sleeping); then TV screens were pulled down from the ceiling with karoke-style words on so you could sing along. Thankfully, no one did. I’m not quite sure what planet the driver was on at this point. I guess he must have been thinking, “I know what this bus of overtired, frazzled, grateful-to-be sleeping people need; some high energy, high volume music to wake everyone up and rattle their nerves to breaking point.”

I thought about getting off, but that wouldn’t have helped. Miles from anywhere, I’d only have to find another bus, which would be the same. Possibly worse. I thought about crying. That wouldn’t help either. I thought about the poor children, who seemed to be dealing with it better than me. So I smiled, looked out of the window, and tried to daydream through the cacophony. We were bound to arrive eventually.

Eventually arrived rather sooner than expected. Around 2 hours from our final destination, we were told the bus goes no further, and we have to change busses. Odd, as we’d bought a direct ticket, but never mind. We were ushered to our new bus, a small, ancient tin can, pitch black with no driver. Luckily, there was one guy who spoke great English, who explained that we were welcome to sleep on the bus, and it would be setting off to our final destination at 5am. It was 9pm. So much for direct. He was very helpful though, and showed us a to nearby hotel, where we took their top priced ‘VIP room’ (£9) and were treated to a reasonably clean, not too damp resting place, where we snatched 6 hours sleep.

The 4.30 alarm was a killer, but we made it onto the bus by 5am. It set off at 6am. We were still in plenty of time for the ferry though, as it was suppose to set off at 8am, but set off at 10am. At least we have seats on the boat, and the TV is on but actually muted with subtitles (this is a first). We’ve seen some World Cup qualifier highlights, and are now 10 mins into Pretty Woman. All good so far. Here’s to hoping that the karaoke isn’t about to start up.

It was always going to be a tough one. We were pretty tired after clocking up the kilometers in Java, followed swiftly by a flight up to Borneo for our boat trip, which was spectacular but remote. In fact, we called a family discussion to decide if the journey from the heart of the jungle to the island of Komodo was worth it. I think we were all tempted to check into one of the great value 5 star hotels in Java and hole up for a week instead. But where’s the fun in that? And surprisingly, it was the girls who persuaded us to take this once in a lifetime chance to see the Komodo dragons.

It didn’t help that we deliberated so long over the price of flying a huge chunk of the journey, that when we finally decided to fly, the flights had sold out. And that the bus turned out to be quite a lot more than the guidebook suggested, despite shopping around and haggling (which did almost halve the first quote), but even so our 3 days of torture have saved us the princely sum of £90. If there’s a flight back, we’re on it, whatever the price!

We look a motley crew as we make the final leg of this epic journey. In fact, we sat down for a coffee & the café owner brought out a comb for the children. The town of Labuan Bajo looms on the horizon, where the Lonely Planet promises a café called The Lounge that sells ‘home comfort food, think burgers that need 2 hands, fish & chips…’. Now that’s something to look forward to. And there’s beer available as it’s a predominately Catholic corner of Indonesia; we’ve seen nothing but Biltang Zero (a no-alcohol beer) for a couple of weeks.

We should be able to afford the luxury of staying still for 3 whole days, our longest stay in Indonesia, before taking a 2-day trip to Komodo from Labuan Bajo. The dragons are something I’ve been longing to see for years, so I’m sure the horror of this journey will melt away once we arrive and prepare for the trip.

However, we then have to get back again…!

Waiting for a taxi to the airport in Pankalan Bun, Borneo

Collecting our bags at Surabaya airport between connections

Walking to the ferry with “dodobears” in Sape, Sumbawa 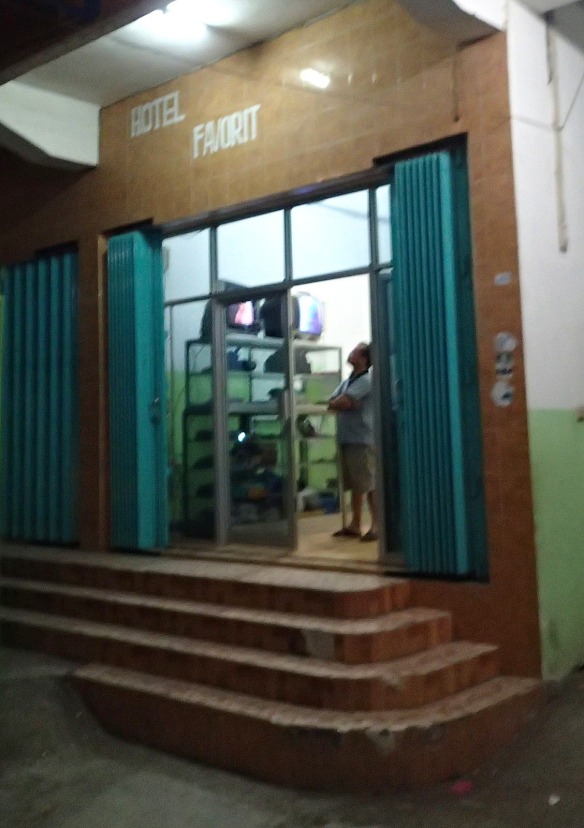 Favorit by name… but not our favourite by any stretch. 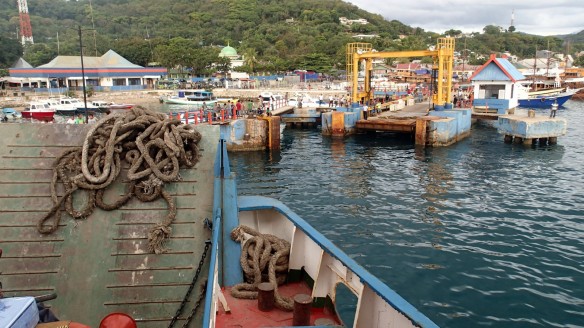 We’re there! Pulling into Labuan Bajo harbour, Flores. We’ve made it!

4 thoughts on “The Neverending Journey”