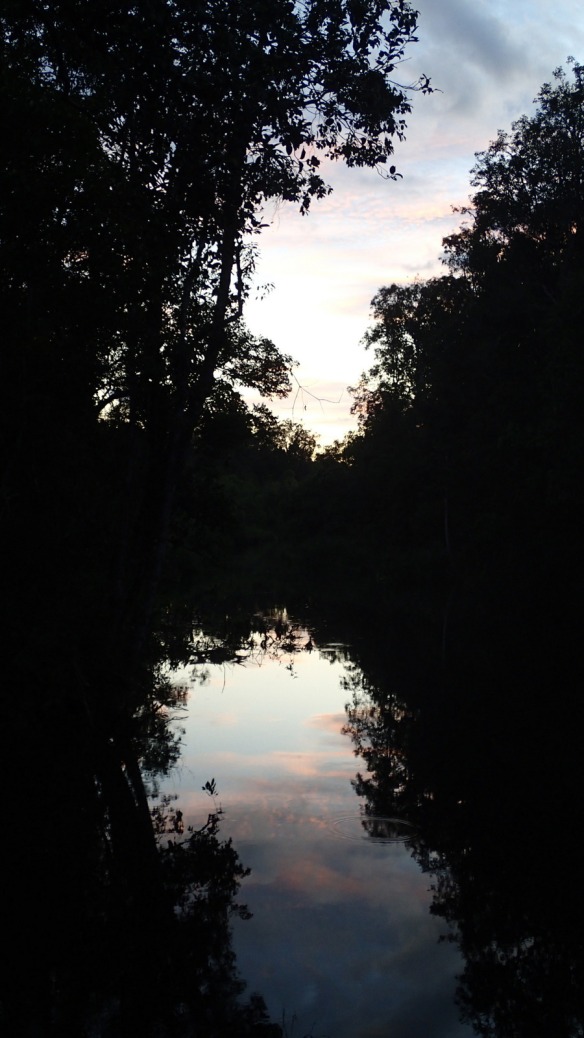 It’s early morning – not even five-thirty – and I’m standing alone on the open deck of our klotok, the wide-decked, open-sided river boat we’ve hired for three days of travel deep into the jungles of Borneo. I feel a very long way from home.

All around, the river water is a peaty red, darkening to glossy black away from the banks where it flows smoothly past our mooring. The blackness is broken only by the reflection of the brightening sky and the occasional deep splash of a surfacing fish. With each splash I turn quickly, hoping I’ll see one of the crocodiles that ate the traveller who ignored warnings not to swim on this very spot a few years ago. I don’t see any but that doesn’t mean they aren’t nearby. The shadows, reeds and fallen trees along the banks could easily hide a dozen crocodiles.

My eyes search the thick jungle swamps on each bank. There are macaques here. I can hear their woo-wooing nearby but haven’t managed to spot any yet. Not that I’m surprised. Their fur blends perfectly with the soaring white-grey tree trunks. Nor have I seen kingfishers, fly-catchers, hornbills, tree frogs, proboscis monkeys or any of the other thousands of species that make this a “biodiversity hotspot”. Only the insects are visible this morning; dragonflies the length of my middle finger, bees, beetles and smaller, indeterminate creatures I hear as passing buzzes beside my ear. And if our trek into the jungle yesterday is anything to go by, I wouldn’t have to go far from our boat to find thick columns of termites or wild, dangerous scatterings of the fire ants that we all fell painfully prey to.

But I don’t mind that I can’t see anything just now. The forest is alive with life. I can hear it. And somehow, gazing out into the confusion of trees, vines, ferns, water plants and bushes, ears alight with whoops, clicks and bird calls, this feels like the most natural state in the World; in distinguishing the complexities of these sights and sounds, I feel my brain slipping into its natural gear. There isn’t a straight line in sight, nor a single colour that diverges from the forest’s natural greens, greys and browns, except with reds and blacks of the water below and the blue of the lightening sky.

I wonder if any of the orangutans we saw yesterday are nesting nearby. And whether this sensation of oneness and peace is how they feel. Their slow, measured gazes and the way they swing through the treetops at whatever speed each tree bends under their weight seemed to imply so.

We’re moored at Camp Leakey, the longest-running research station in the World, where for the last 40 years , Dr. Galdikas has been observing wild orangutans as well as rehabilitating captured ones.

These thoughts are heightened by the thrill of being so far from civilization. There isn’t a hospital for many hundreds of miles and few roads through the jungle on which to reach one… well, except the charity-run orangutan hospital half-way up-river. I guess they could probably set a broken bone at a push.

It took two full days to get here but today we’ll turn our klotok around and begin the return journey, stopping to visit one more orangutan feeding station on the way. This is the remotest place we’ll visit on our travels. From here on we’ll slowly be returning to modernity.

I was going to end there, leaving this post as an elegy on Man’s Primal Being, Oneness With Nature and other romantic daybreak thoughts. But then…

With a crash, a tree beside us swung forwards, showering leaves onto the river. For a moment I couldn’t see what had caused the sudden commotion. The jungle fell silent. Then, the tree snapped back, the leaves spread out into the current, leaving a single, large orangutan a few metres from where I stood. He watched me. I watched him. As entrances go, I had to admit it was impressively dramatic. Then he swung over to where our boat’s mooring rope secured us to a fallen tree.

Was he going to pull us to shore? Come aboard? He gave the rope an exploratory tug but our klotok is big and would have needed a much more serious effort to shift. Looking disappointed, he gave up and climbed onto a comfortable-looking tree, descending occasionally to pick a pandanas shoot or fish a discarded piece of fruit from the water.

Slowly, the rest of our family awoke, drifting forwards to join the mutual contemplation, orang1 and orangutan.

Then the other klotok moored nearby woke up, too, and began calling and throwing watermelon rinds into the river. The spell was broken; the orangutan moved off and we retreated inside for a breakfast of our own.

[1] In both Indonesian and Malay, orang means “man”. Orang utan means “man of the forest”.

“No 54,
The House with the bamboo door,
Bamboo Roof and bamboo walls,
They’ve even got a bamboo floor,
At the house of bamboo!”
Andy Williams, ‘House of Bamboo’

For the next 5 days, we’re moving in to the House of Bamboo.  It really is entirely made of bamboo, and the kids adore it.  It certainly has a lot of character, and the location is absolutely stunning: on Ko Kraden’s honeymoon brochure, picture-postcard perfect beachfront.

However, having now removed (or rather, squealed at Fergus to remove) 3 frogs (1 dead, 2 alive), 3 cockroaches (both alive) and a number of unidentified flying insects, I am starting to realise that Thailand has turned me from backpacker to flashpacker.

It’s only a couple of months ago that we were roughing it in the Himalayas with hardly a complaint, but I now find myself craving the comforts of daily bungalow cleaning, fluffly white towels and walls that don’t allow the wildlife in.

I think I better get used to it though, we have just a few weeks of luxury in the most developed nations in SE Asia before we fly to the Philipines, and then to Indonesia, where I rather suspect I may find myself craving the comforts of the House of Bamboo.

Our little semi in suburbia will feel like a mansion when we get back! 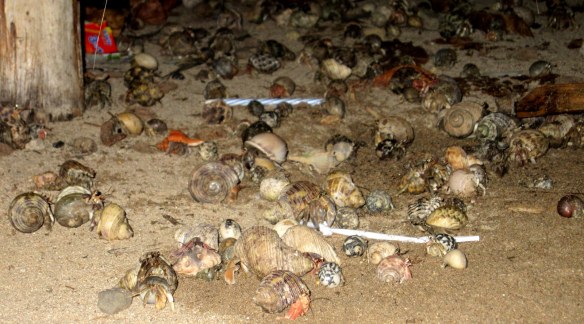 One night, here at Ko Mook, we found a mass of hermit crabs under the Thai massage hut.  They had all different shells which made them look pretty.  Coming back the next morning, we found they were all gone!  Had they all died?  But the next night, they had come back.  I picked up a supposedly unused shell which immediately sprouted unexpected legs!  I was terrified.  I dropped it.  Do you think you would have dropped it too?

I still had my eyes half closed as I stumbled back to bed from night time toilet trip, torch in one hand. I’d reached the mosquito net and was about to start searching for the opening when a thought finally forced it’s way past the haze of sleepiness fogging my brain. Something had been moving in the bathroom as I’d turned and closed the door.

Moving? Nothing should be moving, should it?

I tried to dismiss it as a fragment of dream. It was pitch dark on the island now the day’s electricity was done. I was half asleep. It was probably some combination of flashing torchlight, blurry vision and squinting creating an optical illusion.

No. It was definitely a snake.

Snake! Instantly, I was awake. I turned back to the door and, re-opening it slowly, scanned the wall with my torch.

Yup. There it was. A thin, green snake squeezing itself out from a gap at the edge of the tiles around the wash basin, tongue flicking the air. Its body curved out about 30cm from the wall, like it was being charmed horizontally. Like, I thought dimly, the toy snakes made of plastic links that writhe slowly when you hold them by the tail. Except I could see this snake’s muscles contort as it pushed more of its body into the room.

Then it saw me.

We gazed at one another for a while, our noses a mere metre apart, unsure of how to address the sudden appearance of this stranger into our night time wanderings. I cocked my head to the side. So, too, did the snake.

I shrugged and stepped back. My thoughts had strayed momentarily to the two sleeping kids in the bed behind me but apart from initiating some kind of midnight snake fight, there didn’t seem much to be done. In the bathroom, the snake seemed to reach a similar conclusion. Reversing its contortions, it started shrinking back into the wall.

I closed the door, covered the gap underneath with a heavy bag, and, getting back into bed with a yawn, made sure the mosquito net was tucked in very, very tight.