After a long laze in Sipalay, we wanted to speed things up a bit, but – wow! – the last three days on Sequijor have been so incredibly full that I could fill a blog post about each, individually. However, it’s getting late and we’re packing up and moving on tomorrow so I guess I’ll just get it all down as best I can before my kids come running back from the coconut trees on the beach to tell me how starving they are and none of it gets written down at all.

Evie, Angering the Apirit of the Balete Tree 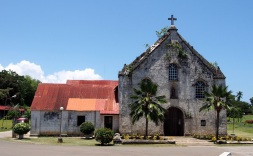 Flavoured Milk at the Dairy 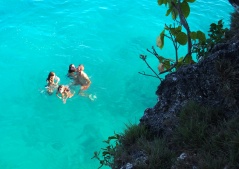 Splashing Around at Cambugahay Waterfalls

On our first day here on Sequijor, we decided to go exploring. Wandering up to the main road, we hailed a tricycle (a Philippine euphemism for a rattle-engined motorbike with equally rattley home-made sidecar) and asked the to take us round the island, stopping at the sights. It was awesome!

We visited a local park in St. Juan with a “swimming pool” (pond) where the girls swam. We stopped at some beautiful, 4-level waterfalls where we all swam, including swimming right under the falls into a hidden cave behind.

Then a coastal resort where they had built water slides and diving boards into towering cliffs over the sea. The slides were closed and partially collapsed, an unfortunate testament to ambition over realisation, but the diving boards were relatively stable-looking, so we climbed up and had a look over the edge. It was a long way down. The kind of long way that made the 10m board at the Leeds pool where our girls took diving lessons seem like jumping off a curb into a puddle. The kind of long way that would give a Mexican cliff diver second thoughts. So, of course, me and the girls all immediately jumped off.

In between, we stopped at old Spanish churches, little farming villages, a 500 year old balete tree said to be home to a powerful spirit (and which Evie climbed most of the way up when our backs were turned — no curses have yet made themselves apparent, though, so I’m guessing the spirit didn’t mind), a co-operative dairy selling real cheese and pasteurized milk (rare luxuries nowadays for us) and a few pretty view spots, eventually returning home exhausted, stimulated and still rattling from hours aboard our guide’s bone-shaking sidecar.

The next day we decided to climb a mountain. There’s only one here on Sequijor (called Mt. Bandilaan) and details on reaching the top (both on the web and our guidebooks) were kind of sketchy so weren’t entirely sure what to expect or even how to get there.

In the end, it was a very easy walk. There was a narrow paved road all the way to the top. The greatest difficulty, in fact, was convincing the various Filipinos we met along the way that we actually wanted to walk. No-one could understand why we wouldn’t use a vehicle when we could afford one.

We did get a bit lost trying to find the path to the actual summit (the road only passes nearby) but when we eventually found it, the 360° view around the island was gorgeous.

Setting off up Mt. Bandilaan

Walking Back Down Mt. Bandilaan

On the way down, our trike driver came and met us near the top. Once more, it took quite a lot of explaining to get across the idea that we wanted him to go back and wait for us halfway up the mountain. As he drove away, he shot us the most astonished and puzzled look I’ve seen since telling a porter in Nepal that we wanted to carry our own bags.

As the mountain had proved so easy to conquer, we decided to spend the afternoon swimming in the sea. Under “suggested places for snorkeling” in our Lonely Planet, it said “strap on your mask and fins and dive in anywhere”. So that’s what we did. Swimming out from our resort (the lovely but only-just-within-our-price-range Villa Marmarine) we saw sea grass, hard corals, tropical fish, lots of sea urchins and generally had fun splashing around in the astonishingly clear, turquoise water. Me and Jem even swam right out to a bangka moored in deeper water where we could free dive down to even more impressive reefs.

For tea we got our own back on the trepidation that all the sea urchins had given us while swimming by ordering sea urchin spaghetti from the menu. Revenge, it turns out, is surprisingly tasty.

Day three. I wanted to do a dive trip and as there was no-one else at our resort who was a diver, we were able to hire the entire boat to ourselves. I would dive while Janet and the girls snorkeled. 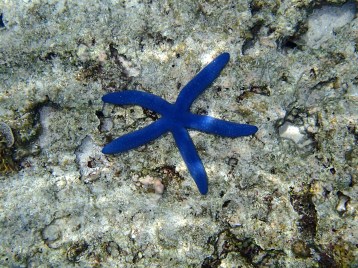 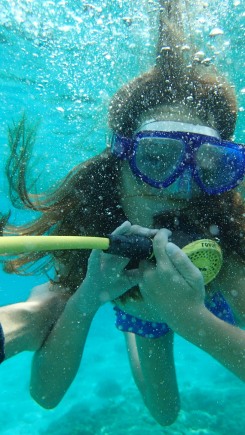 I wasn’t sure whether to believe the guy at our resort when he said the local marine sanctuary (Tulapos) was just as impressive as Apo Island (a famous marine sanctuary 15km from here) but it was probably the best dive I have yet done. The soft and hard corals, rainbows of fish (too many to mention), sea snakes (yes, another banded krait but this time as big as a python), gigantic lobsters and surreal nudibranches alone they would have been enough to make for an amazing dive. But while under, I swam with not one but two massive sea turtles, fulfilling a diving ambition I’ve had since I learned at New Year.

After returning, as I still had plenty of air left in my tank, and the dive boat was moored in very shallow water, I gave Jemima and Scarlett an impromptu SCUBA lesson, giving them my secondary air source and sinking down to the sea floor to explore. They loved it.

All that alone would have made for a memorable day’s diving but on the way home something even more astonishing happened: a huge school of dolphins appeared near our boat, then, when the crew started clapping and thumping the deck, swam over and raced alongside us, leaping, twisting, diving, pairing off, skimming the surface… And all the while, the long, flat-decked nose of the bangka meant we could stand right out over the water, surrounded by dolphins playing on three sides. It was magical, and, according to the crew, incredibly rare in the waters around Sequijor.

Whew! Three days of intense and thrilling experiences and I feel both awed and exhausted. Tomorrow we move to a new resort with a pool. I wouldn’t be too surprised if we ended up being less ambitious and just spend the day recovering at the poolside.

4 thoughts on “Busy Days on Sequijor”