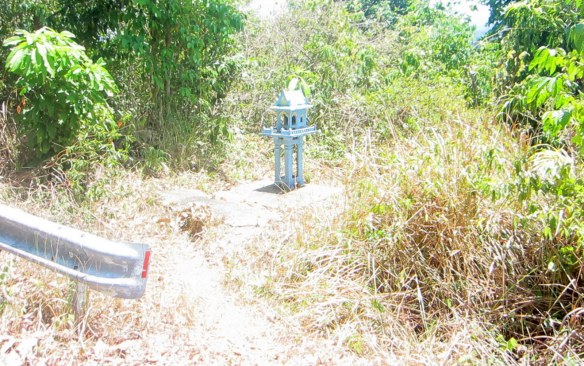 The spirit shrine where Scarlett came off her bike

My lucky landings have served me well over the whole of travelling.

At KC’s at Chitwan National Park a piece of bamboo treehouse fell at me. It was the tallest one and was about six metres. Luckily, instead of landing on my head, it landed very close – on my shoulder. So when we went trekking again, I didn’t have to carry my own rucksack.

The second time was, just as my shoulder healed, when I had my big fall in Nepal. I fell five metres and instead of breaking both my legs I only broke one! And I didn’t have to carry my rucksack. Again.

The third time was a week after I had an x-ray saying I could run and jump again. I had a bike crash. I was going downhill on a rented bicycle and my brakes weren’t working. I kept going faster and faster and couldn’t stop. I was very, very, very, very, very scared. Daddy was urging me on. My sisters were going slower because their brakes were working so there was just me and Daddy there. I managed to get round about five or six corners before it happened…

A corner came up and hit me. Or more like it hit me all along the side of my bike. I went flying. My bike came after me. I think I landed before it.

What happened next was a mystery. One minute I was on the ground, the next minute I was in Daddy’s arms. Well, things like that do happen when you bump your head.

The rest of the family arrived a few minutes later. But that time, Daddy’s t-shirt was a little bit bloody. Mummy asked me whether or not I was alright. I said, “yes”.

It was lucky because instead of landing in the undergrowth and wild places where snakes could live, or the big drop further up, I landed just in front of a spirit house on the softest bit of earth I could have landed on.

Mummy found my shoe eventually. And even though she doesn’t believe in spirits she did a little pray to them to say thank you. Daddy found me a little plastic superhero with moving arms on the floor and I called him Squiddo the Superhero. I think both of them working together saved me from breaking anything.

8 thoughts on “Me and My Lucky Landings”