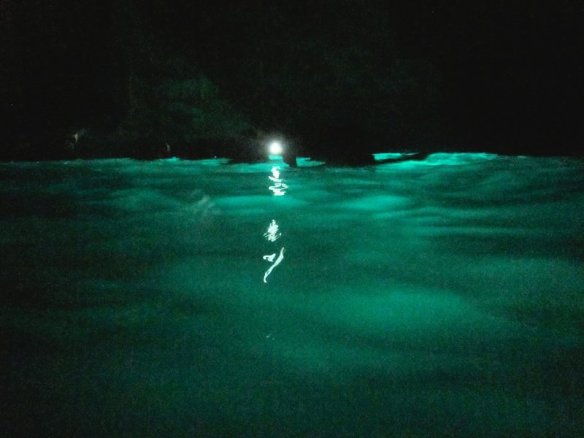 Today we went to Emerald Cave (in 4 steps):

We walked about 3 metres to the boat, waded out to it and got on.  Our guide started the engine and we were off, zooming along, the engine roaring and popping behind us, as we made our way towards Emerald Cave.

As we went I kept a sharp lookout for Emerald Cave.  Then I saw it.  At first I saw only boats, and then the cave.  Soon, I knew we would be in a long, dark tunnel, swimming with our guide.

When finally we were all in the water, our guide led us over to a creepy, cavernous, cold cave in the side of the low-hanging cliff…

Inside the cave it was no better than it had looked, just a long tunnel leading off into the distance.  Then it began to grow dark.  I couldn’t see…until the guide switched on his torch.

I could hear the waves crashing against the cliff walls with great thunderous BOOMS!  Only then I saw the light, we were approaching Emerald Cave.  I swam fast towards it until I reached the light, first.  But not by far, my sisters were catching up fast.  Soon we were all there.  It looked like a secret cove with a small beach and big cliffs surrounding it.  The only entrance or exit was the tiny dark cave.

Me and Daddy went and looked at some rocks that looked like dinosaurs and then I went in the sea and played silent gliders with my sisters, which is a game where we swim very quietly towards each other and attack (splashing each other).

[Evie and her sisters all wrote about our trip to Emerald Cave as part of homeschool. You can read the other accounts here and here.]