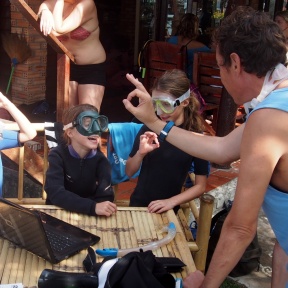 As babies, we enrolled our children in the Waterbabies swimming lessons.  The course culminates in you plunging your offspring into the water for a Nirvana Nevermind style underwater photo.  I didn’t realise then that it may have been the start of a long line of underwater experiences.

Coupled with being strong swimmers and a burning desire to “see tropical fish” – plus of course wanting to be like Daddy who’s doing his PADI certification, the girls were desperate for us to enroll them on the ‘Bubblemakers’ kids scuba diving course that you can do here in Koh Tao.

So today, after much excited anticipation, they finally got to don wetsuits, flippers (well, Scarlett only got one flipper – she still has a plaster cast on her broken leg) and a full-on scuba diving vest with attached tank of air, regulator and weight belt, and had their first underwater adventure.

I came along and snorkeled in the water behind, helping Scarlett with some of the bits that are a bit tricky with a broken leg (like climbing up step-ladders onto boats…hmmmm).  It was terrifying to attach heavy weights to your children and watch them jump in the sea.  Very counter intuitive.  But they got the hang of it straight away, breathing through the regulators face down and doing the ‘OK’ hand signal to the instructor.  They looked like miniature cool scuba diving surf babes.  Perhaps a glimpse of things to come.

I loved seeing the girls’ excitement at seeing the deep, deep water and the schools of fish.  We had one little bit of a problem when Scarlett felt a bit panicky about how far we’d swum, and how far we had to go back, and somehow convinced herself that we were going the wrong way.  But a cuddle from mummy soon sorted that out.  It’s nice to know that they are still my little babies, even though they look like mini cool scuba diving surf babes.

The verdict when asked about it later was very positive from Jemima and Evie, who want to use some of their Christmas money to do another dive, but Scarlett thinks once is enough, bless her.