Yesterday we finally got through enough of the necessary recovery sleep and last-minute organisation to do some sightseeing in Kathmandu. The girls were thoroughly fed up with getting their final rabies and Japanese encephilitis inoculations, finding a new, cheaper guest-house, changing money and buying air tickets to Lukla (which took longer than buying our tickets to Nepal!), so we took a taxi up to Swayambhunath, also known as the Monkey Temple.

The temple used to be on an island when all of Kathmandu was underwater but now stands on a hill to the west. It is also home to thousands of (rabies-carrying) rhesus monkeys which locals consider holy to the Hindu god Hanuman. Which is why no-one beats them off with sticks when they steal ice creams and generally bother the pilgrims, tourists and groups of cool, posing Nepalese teenagers.

I’m not sure my three monkeys are holy to Hanuman but no-one seemed to beat them off with sticks either, so I guess they might be. And they certainly had a great time at the temple. They weren’t too bothered about the statuary or carvings I tried to point out but they liked spinning the Tibetan prayer wheels, chasing the pigeons and, of course, the monkeys, but we did have an interesting chat about who the Buddha was, enlightenment and reincarnation (they were particularly outraged at the idea that women who behave well might just be lucky enough to reincarnate as men).

For myself, I found the temple fascinating. It has been in constant use since Europe was in the Dark Ages and, apart from the teenagers, is probably largely unchanged, and is packed with a mixture of Tibetan Buddhist and Hindu iconography. Wherever I looked, there was something I would have loved to examine more closely if I hadn’t also been realising that I could no longer see my children and leaping to my feet in panic. 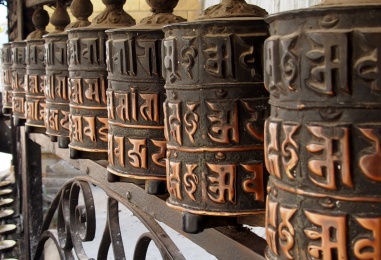 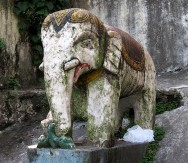 At the top of the Greeat Eastern Stairway 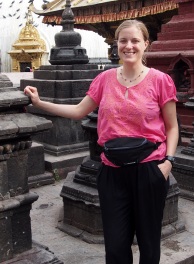 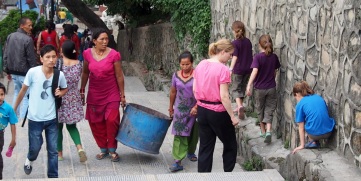